I am the son of Kathryn (living) and Orion the III (deceased). I have two brothers (both living), Brad and Orion the IV. We were raised in The Colony and Carrollton, in Texas and in this Diocese of Fort Worth. My family is now split between Texas and Florida. I was thinking about the priesthood in high school, but seminarians had to carry their own student debt back then. My dad had earned money for college working on electronics in the Air Force, so I decided to enlist.
I entered with a contract to work on computers and reported to basic training at Lackland Air Force Base, San Antonio, TX, August 24th, 2001. I was in basic training during September 11th. I completed tech school at Keesler AFB in Mississippi, February 2002, and reported to Whiteman AFB, Missouri, for my first assignment, where I would spend 5 years. I deployed with CENTCOM less than a year later, Winter 2002 – Spring 2003, when we went into Iraq, although I only went as far forward as Qatar. I re-enlisted in 2005 and deployed again, this time to Kuwait in 2006 assigned to Force Protection. After returning I received orders to Ramstein Air Base in Germany, where I would be for the last three years of my enlistment from 2007 to the spring of 2010, I had to extend 6 months to take the assignment giving me 8.5 years total time of enlistment. I would also deploy for a third time, returning to Qatar, but to a different base there.
After separating from the Air Force in April of 2010, I entered the service of Jesus Christ and His Church in August of 2010, so I’ve been serving the Church full-time for well over a decade. I spent my first four years in formation for the priesthood (2010-2014) at Holy Trinity Seminary in Irving, TX. The rest of the time I was assigned to a seminary in San Antonio, TX. I was ordained to the diaconate in March of 2020, while we were in lock down, in a very small ceremony with 5 other guys. Then we were ordained to the priesthood together, as the largest class ever ordained in the Diocese of Fort Worth, on May the 22nd in the year of our Lord 2021. I am glad to be here and serve the people of God in the Diocese of Fort Worth at St. Jude Parish in Mansfield, TX.
I am hoping to return to the military as a chaplain, please pray for me with this intention. Many people have said, “we don’t want to lose you,” but in praying for me to return to the military you’re not giving up anything. If I am allowed to return it would not be until after 3 years ordained, per the rules of the military. And newly ordained priests only spend 1-3 years at their first assignment, then the Diocese swaps us automatically, so I’ll be moved either way.
Please also pray for more young men to find the courage to follow their vocation to serve as priests in the Diocese of Fort Worth 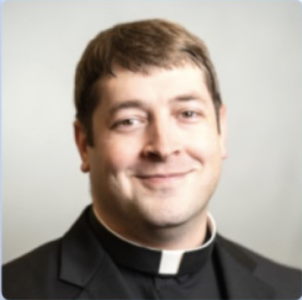