He was born in Dallas, Texas to Catholic converts Samuel Kelley from Southern Missouri, and Dorothy Buffington from Southern Minnesota. He has three sisters and three brothers. His home parish was Saint Pius X in Dallas and graduated from Bishop Lynch High School in 1979. He enlisted the U.S. Air Force later that year.
After leaving the Air Force he discerned his vocation and began college at the University of Texas at Arlington. After his freshman year he entered the Seminary for the Diocese of Fort Worth. He received his undergraduate degree from the Pontifical College Josephinum in Columbus, Ohio in 1990, and then entered Assumption Seminary/ Oblate School of Theology and attained his Master of Divinity in 1995.
Father Kelley was ordained to the priesthood for the Diocese of Fort Worth on December 9, 1995, the day after his 36th birthday by Bishop Joseph Delaney. Bishop Delaney assigned him to St. John the Apostle Parish in North Richland Hills. Msgr. Charles King was his pastor, and the same priest who baptized him 36 years before. After two and a half years as parochial vicar there, he was assigned to Immaculate Conception Parish in Denton for one year, and then made pastor of Holy Angels Parish in Clifton and Our Lady of Guadalupe Parish in Morgan. Both of those parishes are in Bosque County, Texas.
Three years later, Bishop Delaney made him pastor of Saint George Parish in Fort Worth, and then after six years Bishop Kevin Vann made him pastor of Saint Joseph Parish in Arlington. He has been at Saint Joseph Parish for twelve years. Bishop Vann also made his chancellor of the diocese at that time. He remained chancellor after Bishop Michael Olson for the first year and a half after that. Both his parents have past away.

Hobbies:
Father Kelley has done extensive genealogical research in his family tree. His eighth times great grandfather on his father’s side was John Kelley who emigrated from England to Plymouth, Massachusetts in 1635. On his mother’s side he has seven direct ancestors who were passengers on the Mayflower and landed in Plymouth in 1620.
Father Kelley has been celebrating Mass at the Ball Park in Arlington since 2015 and will continue to do so that Globe Life Field when the Covid 19 restrictions will be lifted. 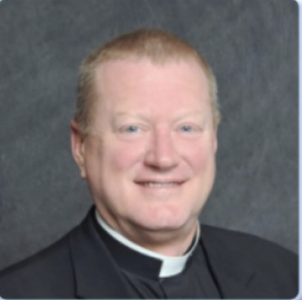