Pamela VanBuskirk Rodrigues was born and raised in the Central Valley of California. She began studying piano at the age of 8. Pam was always active in music through grade school and high school, participating in marching band, concert band and choir. A member of the International Order of the Rainbow for Girls, Pam was selected as Grand Choir Director for the State of California in 1982. She attended the University of Southern California, studying Music and Architecture and was a member of the USC Trojan Marching Band. It was here she met her husband, Don, whom she married in 1984. Don and Pam’s family grew with the addition of three children while living in California, eventually relocating to Virginia in 1994 and then Texas in 1998, where the family became parish members of St. Jude Catholic Church. Pam began singing and cantoring at mass when the “new” church opened (now the St. James Hall), began forming the foundation of the Children’s Christmas Choir program, and was part of a small group of music loving parish members who began to build the SJCC Music Program by recruiting members to the choir to sing at the weekend masses and special liturgical celebrations. Now an empty-nester (except when the grandkids are visiting), Pam is able to devote additional time to the church by serving as Co-Director of Liturgical Music, Wedding Coordinator and a member of the Finance Council. Pam looks forward to traveling to visit her children who are stationed around the world as members of the USAF and US Army. She is also a California and Texas Certified Nursery Professional and enjoys working in the garden with Don. 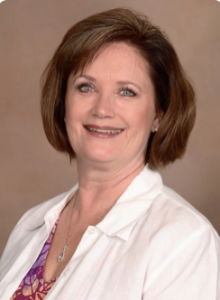